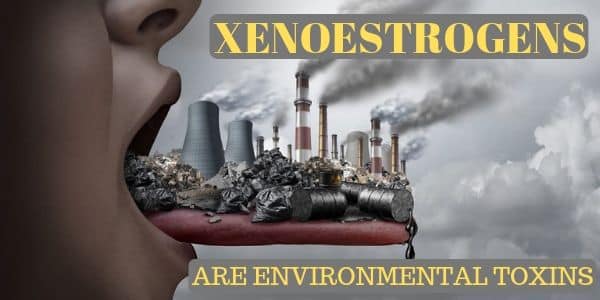 Xenoestrogens and cancer understanding the estrogenic effects in the body.

Xenoestrogens and other toxins that affect estrogen signaling. Estrogen signaling is not just confined to estradiol, estrone, and estriol. I want to take it deeper than the visible surface by stepping outside the estrogen that is produced within the body and look at estrogenic signaling that comes from environmental toxins.

You may know them as xenoestrogens. Xenoestrogens are compounds in our environment that have estrogenic effects in the body. The official definition is “man-made non-steroidal organic chemicals which have been released into the environment from agricultural spraying, industrial processes, urban waste or consumer products” [25].

Common, well-known xenoestrogens include polycyclic aromatic hydrocarbons (PAH), pesticides, polychlorinated biphenyl (PCB), dichloro diphenyl-trichloroethane (DDT), some drugs (e.g., antiepileptic drugs), fungicides, cotinine, phytoestrogens, mycotoxins, bisphenol A (a plastics additive), phthalates, alkylphenols [26].  Even heavy metals have been labeled as metalloestrogens due to their estrogenic activity [25]. All of these xenoestrogens mimic estrogen effect in estrogen signaling via the binding to estrogen receptors and through non-estrogen receptor pathways.

Toxins such as Mercury, Lead, Organochlorine pesticides (OCP), Polychlorinated biphenyls (PCB) and many others were among the identified. This Environmental Work Group study was repeated in 2009 in collaboration with 5 independent labs in the U.S., Canada, and Europe and found 232 chemicals in the umbilical cord blood of babies born from 2007-2009. The toxins identified were similar and included Mercury, methylMercury, Lead, Polychlorinated biphenyls, Phalates, Bisphenol A, and Perchlorates.

BPA – bisphenol A is a Xenoestrogen

Many discount the impact of BPA due to its weak estrogenic activity. That would be a mistake. As weak as BPA is in potency, it is strong in its ubiquitous presence in the environment. Prolonged exposure of a low potency toxin is just as dangerous as a short exposure of a high potency toxin. One could argue that it is perhaps more dangerous due to it’s indolent, gradual accumulation and effect.

What the body does with BPA is worse than the BPA itself. Scientists are discovering that the metabolites of BPA are equally prevalent and maybe even more toxic. One such metabolite, 4-methyl-2,4-bis(4-hydroxyphenyl) pent-1-ene or MBP for short, is found to have 1,000 times the estrogenic activity of BPA alone [28] which makes up for the weak estrogenic activity of BPA.

Additionally, bisphenol A has been shown to cause a shift of the estrogen receptors from an ER-beta dominance to an ER alpha dominance by increasing the genetic encoding of ER-alpha [29] [30]. This shift to ER-alpha dominance favors inflammation and growth. All this in the low-level blood concentrations commonly found in humans. Most alarming, these low levels are found in our children and are changing our children’s response to hormones (estrogen receptors) even before they are even born [31].

25  Darbre PD. Metalloestrogens: an emerging class of inorganic xenoestrogens with potential to add to the oestrogenic burden of the human breast. J. Appl. Toxicol. 2006; 26: 191–197.

27 Timms BG et al. Estrogenic chemicals in plastic and oral contraceptives disrupt the development of the fetal mouse prostate and urethra. Proceedings of the National Academy of Sciences. 2005.