The Problem With Protein 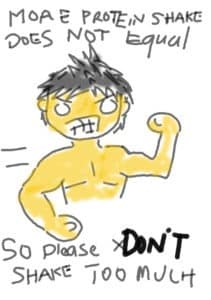 Residing in America, you quickly learn one of our most revered misnomers: PROTEIN.

Not only are we obsessed with eating and drinking it, we supplement non-protein foods such as fruit with protein powders.

Regarded as to be one of the most essential and sacred of all nutrients, the Dutch chemist Gerhard Mulder (1839), upon uncovering these nitrogen-containing compounds, used the Greek word proteios (“the first quality”) to call them proteins. Cultural prejudice powerfully influenced the “science” of nutrition from the beginning.

A German scientist, Carl Voit (1831-1908), despite having found that human beings required only 48.5 grams of protein daily, announced that good health required 118 grams each day.

The blossoming “scientific research” of nutrition, so deeply rooted in social elitism, considered it factual that the lower classes were lethargic and much less intelligent and that these “deficient qualities” were because of a lack of protein in their diet plan.

Meat and dairy products were/are thought to be synonymous with protein.This is a myth!

In 1982, Francis Lappe issued a totally brand-new 10th anniversary edition of her very influential book, “Diet For A Small Planet”.

This publication had been responsible, in large part, for keeping up the myth that it is incredibly challenging to get top quality protein from plants alone. In previous versions she stated that in order to get “complete protein” from plants, one had to meticulously choose and mix specific types of plants.

In her 10th version, with regards to getting high quality protein from plants, she concluded, “With a healthy, varied diet regimen, worry regarding protein complementarity is not necessary … if individuals are getting sufficient calories, they are practically guaranteed of obtaining adequate protein.”

Proteins are chains of amino acids and there are hundreds of thousands of various kinds of proteins, consisting of enzymes, bodily hormones, structural tissues, and also transport molecules.

Only 8 amino acids are considered “essential,” that is, we need to obtain them via our diet regimen. All various other proteins can be manufactured from those 8.