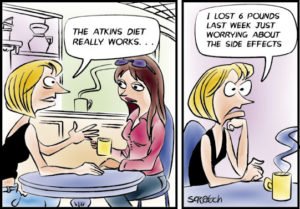 Robert C. Atkins “borrowed” the diet that he promoted from the British and became wealthy as a result of it. It had been the standard diet prescribed for type II diabetics in Great Britain for many years before Atkins’ exploits and marketing made him a household name.

I worked for him in the year 2001 but had to remain a “closet vegetarian” in order to remain employed. This diet, as he explained to me, should include predominantly protein and fat with a very low intake of carbohydrates. This dietary pattern enabled people to eat as often and as much as they desired without weight gain. The primary metabolic consequences resulting from this dietary regime centered around the fact that the body changed its’ source of fuel so that it would be driven by ketones (by-products of fat metabolism) rather than glucose, which is the primary source of fuel in normal eating.

The true metabolic benefits that Atkins was hoping would occur with “his diet” do actually occur during water fasting. However, in water fasting, there are no ingested toxins requiring elimination, the gastrointestinal tract is completely rested thus permitting repair and healing to occur, the immune system is no longer diverted from its’ defensive capabilities to monitor oral intake and all abnormal tissues are scavenged for fuel. Water fasting is, therefore, the only real ”cure”. And “it cures what ails you”.

Of course, Dr Atkins was woefully misinformed in that he equated protein with animal flesh, which includes their muscles and organs as well as their secretions (milk).  Also falling within this distorted and fallacious definition of protein are the eggs (fertilized and unfertilized) of the non-mammals. One only need wonder for a moment where these animals got their protein. Atkins himself, tragically served as his own illustration of the long term effects of this dietary regime when applied to human beings. 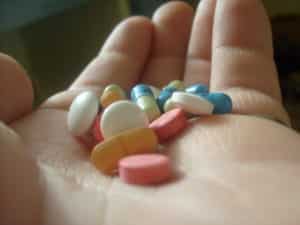 By the time he reached his 60s and early 70s, he had long been unable to fly in airplanes due to a high frequency of cardiac arrhythmias and hypertension. His skin was dried and wrinkled and he was infamous for becoming easily angered. Sitting in his office day by day, he would take multiple pharmaceuticals and many supplements while his physical capabilities and endurance slowed to merely walking from his home to his car to his office and back again. At the age of 72, he was desperately hiding his morbid condition from the public for the sake of the financial empire that surrounded him but he ultimately suffered two heart attacks; the second one occurring about 6 months after the first, ended his life.

Most people who frequented his center in midtown Manhattan were unable to maintain the “Atkins diet” for very long, however many of those who persevered found themselves being diagnosed with cardiovascular disease, strokes and cancer, all of which ended their lives prematurely.

The diet advocated by Atkins and his followers was and is appropriate for scavengers, such as hyenas and jackals, not for primates and certainly not the human variety. A whole food, plant based diet, with intermittent fasting for short and/or long periods always results in an optimally functioning body, a slender build, plenty of energy, restful sleep, a desire to exercise, a vigorous and long lived sex life, a glowing disposition and freedom from infirmities other than trauma, which in that state of health, heals quite rapidly.