Mycotoxins Increase The Risk Of Cancer 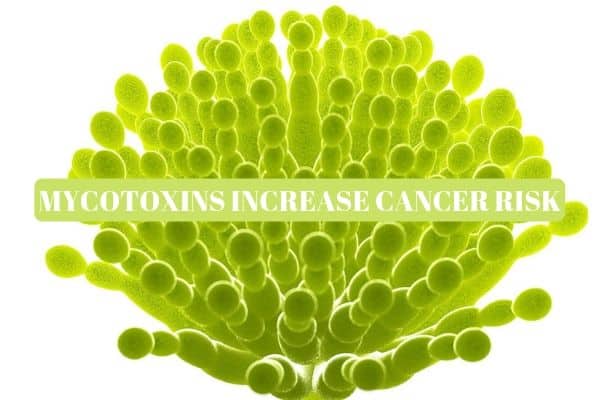 Mycotoxins have been shown to obstruct apoptosis or programmed cell death.

Mycotoxins are toxins are just as their name implies: myco = fungus and toxin = toxin. These toxins originate from a fungus that commonly grows in the food supply and in water damaged areas. Mycotoxins will increase the chance of cancer developing in the human body.

Mycotoxins can be defined as “natural products produced by fungi that evoke a toxic response when introduced in low concentration to higher vertebrates and other animals by a natural route“ [41]. Mycotoxins are some of the most well-known toxins to contaminate the food supply including but not limited to aflatoxin, ochratoxin, fumonisins, patulin, zearalenone (ZEA), and trichothecenes from the fungus Aspergillus, Fusarium, and Penicillium.

In addition, mycotoxins are found in water-damaged walls, wallpaper in homes, buildings… Not all mycotoxins are inherently toxic as the antibiotic penicillin is a mycotoxin. The question lies in where is the toxicity directed?

Mycotoxins are a world-wide problem affecting an approximate 25% [42] of the world’s food supply. Mycotoxins are most commonly found in the grain and cereal foods i.e. wheat, barley, nuts, corn, rice… Even the coffee in your morning cup of joe is a potential source—so sad.

These food items are commonly stored at room temperature in containers on the counter in the kitchen or in foods stored in the pantry or on the store shelf which is in part the origin of the risk. Don’t forget about animal products, such as beef, chicken, milk, eggs… that are raised on mycotoxin contaminated rich foods are also a potential exposure source.

Zearalenone is an endocrine disruptor; specifically, zearalenone mimics estrogen [45]. Zearalenone readily binds to the estrogen receptors (ER). Zearalenone stimulates an estrogenic signal through the specific binding to the ER-alpha receptors, not ER-beta [46].

This preferential ER-alpha affinity shifts the ER-alpha/ER-beta receptor balance to an ER-alpha dominance. This affinity of zearalenone for ER-alpha and ER-alpha dominance has been shown to increase the risk of breast cancer [47], esophageal [48], colorectal cancer [49] and prostate cancer [50].  Specifically, this mycotoxin has been shown to inhibit apoptosis (programmed cell death) stimulate proliferation, promote cancer cell invasion and metastatic spread of cancer cells 45 [51] [52].

Most interesting is that this powerful estrogenic signal, peak proliferation, and invasion occurred at the lowest levels of exposure. This has enormous implication as most people are not exposed to acute, high toxic loads of mycotoxins, or any toxin for that matter, but instead are exposed to small, regular, indolent exposures to hundreds of toxins every day.

Again, evidence shows that toxins like zearalenone can bioaccumulate in the environment and the human body. It is this regular exposure, bioaccumulation and synergistic toxic effects of these multiple toxins that change the environment in our body to increase the risk of cancer.

The Effects of Mycotoxins and EMF’s

As in all things, disease such as cancer is never the result of 1 item. It is the collective, synergistic effects that come together to affect disease risk. This is no more evident than in the growing volume of research that points to the synergistic effect of EMFs and mycotoxins.  EMFs are all around us in our day-to-day activities and our home is the biggest offender.  Common sources of EMFs include:

Our home environment can no longer be simply defined by the walls and roof of our house/apartment/Condo… but these home sources of Wi-Fi exposure even travel with us in our personal cellphones, car Wi-Fi… In fact, with the 4G and the coming 5G wave, EMFs are essentially becoming another element in our atmosphere home: Oxygen—check, CO2–check, EMFs—check.

Yet, we really don’t know what the long-term impact will be. The same mistakes are repeated time and time again. The new definition of our home environment must now include the immediate environment of our body wherever it goes.

EMFs have their own set of carcinogenic risk issues, such as leukemia [53].  The International Agency for Research on Cancer labeled EMFs as potentially carcinogenic in 2011. Research also shows, that in addition to isolated EMF exposure risk, EMFs can actually stimulate fungal growth [54] [55].

This post is not about EMFs specifically, but about their synergistic activity with fungi which can have significant implications in the increase in mycotoxin production and mycotoxin release. Whatever the mycotoxin source exposure is (food, water-damaged houses, vaping pens…), add EMF exposure, which is all around us, and the mycotoxin production, mycotoxin exposure and resultant risk i.e. estrogenic, carcinogenic risk, will increase.

When it comes to potential environmental toxins, in this case, mycotoxins, everybody is looking for the 1 hit phenomenon or the 1 giant bomb that definitively results in disease. That is a pie in the sky view and won’t be found except in very rare cases of exposure.

In fact, it is a basic misunderstanding of what and how toxicity can occur. In this day of 30-second commercials, sound bites, and attention, if the cause and effects are instantaneous, then they don’t exist.

This lack of patience has even permeated science. The reality is that environmental toxins can also work via what I like to call the rain of 1000 bullets. This mechanism is the regular, often unrecognized, smaller spray of hits of accumulative toxic effects will cause disease given adequate time.

It is like a shotgun versus a bomb. Odds are much better that you will survive the acute spray of a gunshot from the shotgun, compared to the direct hit by a bomb, but eventually, that spray of gunshots will do its damage and get the same job done given time.

These toxins were never approved based on long-term studies that detailed their long-term risk to the general public; except in the case of the long-term exposure tests ongoing of which we are the unwilling test subjects without our approval. Time will tell the final numbers that will be written in some future scientific publication and our unknowing participation will be a mere afterthought.

40 Wallace Hayes A. Mycotoxins: A review of biological effects and their role in human diseases. Clinical Toxicology.1983;17(1):45–83.