Is Vitamin C An Antioxidant Or A Pro-Oxidant? 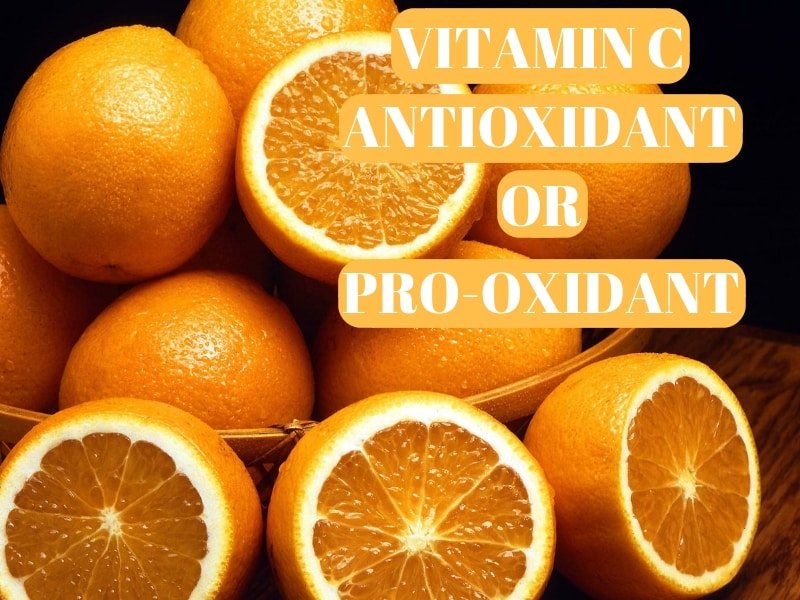 Let’s answer the question, is Vitamin C an Antioxidant or a Pro-oxidant?

This is the third article of a seven-part series by Nathan Goodyear, MD at An Oasis of Healing on the evidence and research on Vitamin C therapy for Cancer.

What is a pro-oxidant?  A pro-oxidant is something that is simply pro oxidation  Rust is a good example of the oxidative process.  Picture your dream car.  Now picture that beautiful, shiny car just off the showroom floor in your driveway.  The sun just glistens off the polished, new paint on the body of the car.

The body of the car is smooth and in pristine condition without a scratch or blemish.  Put the key in the ignition and turn to hear the crisp, clear ignition and the gentle hum of the engine.   Push the gas pedal and feel the horsepower take over.  There is no delay.  There is no dysfunction.  That is the lack of the presence of oxidation.

Vitamin C as a Pro-oxidant

Reactive Oxygen species are oxidative species i.e. hydrogen peroxide (H2O2), hydroxyl free radicals (OH−), and superoxide anions (·O2−), that react with cell components to create stress to the cell and if unchecked—damage.  The end result can be oxidative damage.

Now, back to that car.  Let that car sit out in the elements for days, months, years on end with continuous exposure to the elements i.e. rain, heat, cold…  With time, what once was a beautiful, shiny car is now a disfigured, rusty image of its former self.

Open the door and hear the creep and crack of what once silence and smooth movement.  Insert the key and turn to hear the sputter, delayed turnover of what once was a crisp, clear ignition start.  What was once a gentle hum that calmed the soul, is now a loud, chaotic noise disrupts the soul.

Push the gas pedal to find a delayed, sub-optimal gas injection and movement where once a horse-power dream existed.  That is the effects of the oxidative process on a car.  The most visible evidence of this process is better known as rust.

However, in cancer, the oxidative process is with the cancer cell.  Whether it is on the body of the car or in the body or cell of a person, the effects of oxidation are the same—damage, visibly evident as rust.

Watch Dr. Nathan Goodyear explain why Vitamin C is both an Antioxidant and a Pro-Oxidant

How can vitamin C be both an antioxidant and a pro-oxidant?  This is a question and yet a true statement at the same time that confounds many cancer doctors today.  As I stated previously, the environment dictates the response. 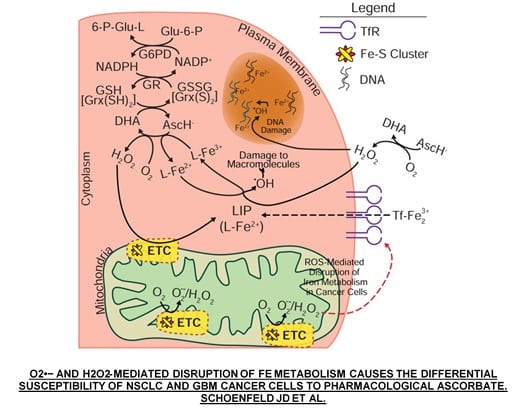 Vitamin C, especially at the higher dosages, that can be obtained only through IV vitamin C delivery, has been shown to be a potent pro-oxidant (not an antioxidant) in cancer cells.   The baseline level of ROS in the cancer cell is already elevated. The high metabolic requirement to meet the high growth present in cancer appears to be the primary cause of this increase in base-line ROS.

In addition, Reactive Nitrogen Species (RNS) via Nitric Oxide (NO), can also play a part in the oxidative process.   Where there is iron, whether on the body of the car or in the body of the person, oxygen will interact with it to create rust, oxidative stress, and potentially oxidative damage.

The key factor that separates cancer cells from healthy cells is that cancer cells lack the appropriate levels of certain enzymes, such as catalase and glutathione peroxidase, to counter these high ROS levels through the reduction of oxidative stress and a decrease in the oxidative damage potential.  This appears to be only true about cancer cells that lack stem activity.  We will discuss this at a later post: the difference in ROS in cancer cells without stem activity versus cancer stem cells.

Healthy cells, that is non-cancer cells, retain appropriate catalase and glutathione peroxidase activity and are thus perfectly capable of reducing the high ROS levels, prevent oxidative stress and the associated potential oxidative damage.  Vitamin C, thus, functions as an anti-oxidant in healthy cells but as a pro-oxidant in cancer cells, as dictated by the environment. 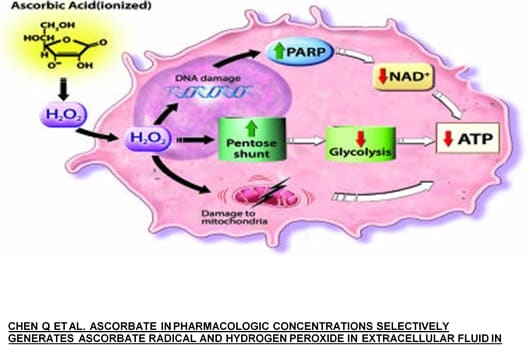 Vitamin C targets and blocks the activity of Glyceraldehyde 3-phosphate dehydrogenase (GAPDH), a key enzyme in glycolysis.  This blockade of the GAPDH enzyme shuts down a cancer cells favorite way to make energy.

Is vitamin C an antioxidant or a pro-oxidant?  Yes.  Vitamin C can be a pro-oxidant in cancer cells and yet can be an anti-oxidant in healthy cells at the same time.  They are cells, yes!  But, the environment of these cells are different in every way.

The functions highlighted above make vitamin C a potent anti-cancer therapy that leaves healthy cells unharmed.  A therapy that attacks cancer and heals the body at the same time—what a great combination and a novel concept!  Now you are informed.