If you look in the alternative cancer world, one of the groups of interventional protocols involves oxidative therapies. And, when you mention hyperbaric oxygen, that’s not really oxidative it’s more oxygenation, so what you’re doing is you’re increasing the amount of oxygen in the body, that’s important.

Oxidative protocols involve hydrogen peroxide, ozone, ultraviolet light, and blood irradiation. These therapies stimulate the oxidative pathways. Why is that important? Well, because the way in which cancer is halted by our immune system is through oxidation. Oxidation is an essential aspect of life on earth. Its counterpart, which is called reduction and in the popular world, lay world, it’s called anti-oxidation.

All cellular functions receive their energy as a result of oxidation. Oxidation is used to halt cancer, it’s used to kill viruses, it’s used to kill fungus and bacteria. If you use things like hydrogen peroxide, ozone, ultraviolet light, in a particular way, you can enhance the body’s ability to stop the production of cancer or any other cells that are unwanted. This is very important. Even to neutralize toxins, neutralize things you’ve breathed in or chemicals that have entered your system, is critical to enhancing your immune system.

Oxidative therapies stimulate the body’s oxidative capacities, which are required for energy metabolism, detoxification and immune system function and result in multiple benefits including, but not limited to the following:

Here you can watch Dr. Lodi explain in more detail why hydrogen peroxide used for cancer treatments plays an important role in healing.

Hyperbaric oxygenation is different, remember one of the main, fundamental aspects of cancer is that it has low oxygen and that’s why it changes and becomes what it is, which is ultimately cancer. You want to always make sure that you’ve got plenty of oxygen, so that’s why exercise helps, going outside, helping to keep your lungs clean and making sure you’re breathing properly, deep breathes in and out.

A lot of people forget to exhale, they breathe in and hold it in, you want to avoid that. If you’re upset about something, take some deep breaths and you’ll see that it will mellow you out, it’ll relax your brain. Oxygenation is very important and oxidative therapies are very important, they both play major roles in healing. 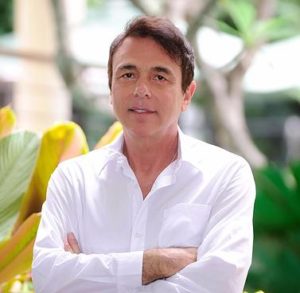 This article was written by Dr. Thomas Lodi. You can download the full Medicine Man article.

The introduction and interview were done by Sarah Best from Get Fresh Magazine.