How I Survived Breast Cancer With Alternative Therapies 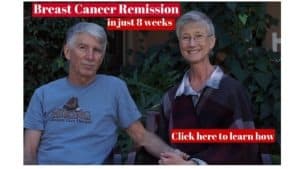 My name is Lorri M, I’m 60 years old, I’m from Napa, California and I want to explain how I survived breast cancer with alternative therapies.

I was diagnosed, originally in 2013, with stage 2A breast cancer. And I went through the conventional treatment because I hadn’t done my research, had a bilateral mastectomy and full-blast chemo, and two years later, in 2015 of this year, I was diagnosed with a recurrence. This time it was more aggressive, inflammatory breast cancer, and it’s in my lymph nodes under both my arms.

Shown in this picture is Lorri and her husband Chris who is 60 years old as well and he came to An Oasis Of Healing to participate in this journey with Lorri in an effort to regain her health and quality of life.

These are Lorri’s story in her own words. Before I came to An Oasis of Healing, my experience, my first journey, was very different. Unfortunately, I listened to my doctors and I was full of fear, confusion, and so I chose to go with conventional treatment, which for me meant a bilateral mastectomy because I thought if I was very aggressive with local, that would be a good thing. And I had what I call “full-blast” chemo. I was supposed to take eight treatments.

Fortunately, I listened to my body and I only took three treatments, and that was a good thing because the things that were being put into me were damaging my body. My body was not handling it, and I became aware that I may be doing damage to a preexisting condition that would have potentially been a lifetime quality issue. So, I only finished three out of the eight full-blast chemo treatments.

Before I came to the Oasis, especially since I’d already been down this road before and I truly thought that I was done because I had followed the conventional treatment plan, I was very devastated. My first diagnosis, I actually handled fairly well. I was positive, I was going to beat this thing, it’s a bump in the road, and then I was going to move on. And I did all those things, but then, to be rediagnosed only two years later, I was just floored, I was devastated. I did not handle it well, emotionally. For the first month or two months, I just would have these moments where I would just fall apart and just have a complete emotional meltdown because “This shouldn’t be happening. I should’ve been well, and it shouldn’t have come back.” So I was in a different place, and it wasn’t good.

Fortunately, in the middle of that, I was sent some information, a link to a webinar that, in reality, I believe saved my life. The link brought me to this webinar that revealed to me the truth that there are other options to conventional treatment, and one of those being functional medicine, holistic treatment, which is being used, unbeknownst to me at the time, worldwide to not just treat cancer patients, but to help them heal from cancer.

So I got very interested, did my research, and after a lot of research I chose An Oasis of Healing, and it has been such an incredibly different experience from my conventional treatment. Not only are the treatments tolerable and effective, but the people here are just so caring, they are so positive. It’s like we’re family. I’m surrounded all day long by people who know me, who care about me, who check in on me, and that includes the doctors.

Watch and listen to Lorri’s entire story on how she became cancer-free in just 8 weeks.

I have never been in a situation where a doctor gives you more than 15 minutes of their time, and here at the Oasis the doctors are available to you all day long, and they answer your questions and they take care of you. Again, it’s kind of like the old days when physicians made house calls, and they knew you and they knew your family.

That’s how it is here at the Oasis. The doctors are not just doctors, but they are supporters, and they are wonderful. And the nurses and the staff, everybody here surrounds you. It’s like you have a village of support, and it’s a totally different emotional experience because you are so loved and supported, and your body knows that and you respond to that.

Well,  I just had a PET scan yesterday and I’m cancer-free. So it’s a very emotional time for me right now because I just learned that after only eight weeks of this kind of treatment and this kind of love, and the lifestyle change that they’ve encouraged me to make, that I am cancer-free. And I know in my heart that I would not be able to say that had I chosen to go the other route because my oncologist had already told me that because it came back it’s not beatable. He said, “It’s only manageable.”

Well, I’m here to tell you I healed through functional holistic medicine, and An Oasis of Healing helped me do that. And I have nothing but gratitude in my heart for the people that helped me get here, and for the staff and everybody that made my journey here as successful as it has been.