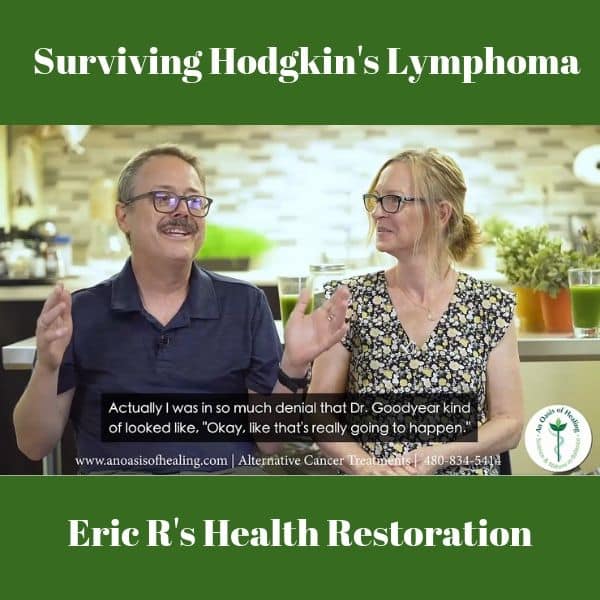 Eric R. was kind enough to share his Hodgkin’s Lymphoma alternative treatment triumph as a result of our comprehensive cancer care program at An Oasis of Healing. Watch the video below in its entirety to hear his story of how he was able to recover his health from the direst of circumstances!

We wanted to share a little of what Eric spoke about in his testimonial video below. We invite you to view the entire video as it is truly inspiring. It could help you or a loved one who may be dealing with cancer.

Eric and his wife Kristy travel across the US in an RV. Eric shared that he had been a healthy person up until his diagnosis of Hodgkin’s Lymphoma. He was having a constant cough that wouldn’t go away and decided to go to Urgent Care and check it out.

Urgent Care told him to get to an Emergency Center immediately. The reason for this was his blood count was extremely low at a 5.1. For men, an average blood count is 13. Following these tests, Eric was admitted to a hospital spending a week there.

The hospital ran tests and they showed that Eric had Hodgkin’s Lymphoma. He and his wife were shocked. Eric did not have the best experience while in the hospital. At that time they happened to be in Tucson, AZ, and Kristy while searching on the internet found An Oasis of Healing located in Mesa, AZ.

They got on the phone and made an appointment to meet Dr. Goodyear at An Oasis of Healing. Eric and Kristy meet some staff members and took a tour of our healing center. He said the center’s environment was amazing as soon as they walked in and completely different than the hospital and laying in bed all day.

Alternative Treatment For Hodgkin’s Lymphoma Helped Provide Eric R. With A Full Recovery As Told In This Video

Eric stated that he was treated like family at Oasis. He said the biggest blessing for him was when he met other patients going through the same types of challenges for their own situation. We all worked together having a common goal; helping and supporting one and other.

Eric suggests for those who are dealing with cancer or have a loved one dealing with it to come and visit An Oasis of Healing, meet Dr. Goodyear and staff and see firsthand for yourself why this place is like never you have ever seen before.

Dr. Nathan Goodyear, unfortunately, had to admit Eric to a hospital as a result of his kidney function. He had to spend six weeks there and another three weeks doing the rehabilitation. The hospital Eric was staying in told him that he would not get his kidney function back and it was probable that he wasn’t going to survive.

When the hospital released Eric, he met with Dr. Goodyear again and was afraid he would not take him back into the center for treatment of his Hodgkin’s Lymphoma as a result of his dire condition. Dr. Goodyear and An Oasis of Healing welcomed him back and immediately began a unique program developed specifically for him.

“Everyone at An Oasis of Healing is treated for their individual circumstances and I’m a great example of that”, said Eric. The program Dr. Goodyear had me on worked incredibly well and I got my kidney’s back! This enabled me to get off the dialysis machine sometime thereafter.

The doctor at the hospital treating Eric on the dialysis machine said that for people in his same condition receiving treatment for only three months would never come off it. Eric was not going to be one of them and got off dialysis from the Hodgkin’s Lymphoma alternative treatment and integrated therapies under the care of Dr. Goodyear and An Oasis of Healing.

Eric ended by saying, “He got his life back”. He was given his final Pet Scan and it showed no evidence of any disease! Seven months after his diagnosis in December of 2018 there was no longer any evidence of disease.