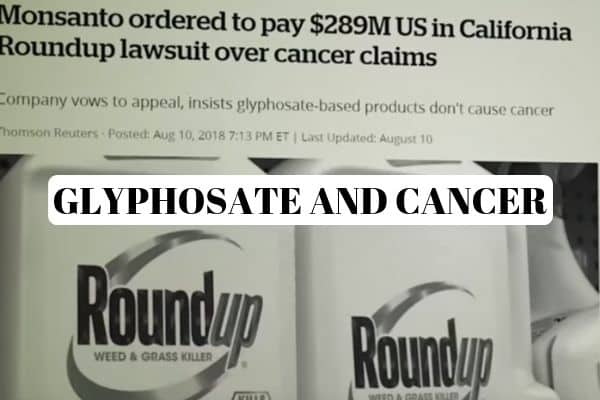 Glyphosate cancer risk is growing steadily with plenty of proof as we will explain in this article!

You may or may not be aware of the glyphosate. It is hard to miss it though. It can be found in your local community hardware store. The glyphosate cancer risk is very real.

The purpose? To kill those pesky, unsightly weeds. You know the commercial product as Roundup.  Glyphosate is the active component within Roundup and other common anti-weed products available on the market. Glyphosate functions as a non-selective, broad-spectrum herbicide. Glyphosate has been approved for use in the U.S. for 42 years [56].

Glyphosate is found primarily in the soil and from the produce grown from the soil i.e. carrots, potatoes. Another 2017 study of soil samples from countries in the EU found that 45% of the soil samples submitted were contaminated with either glyphosate and/or metabolites of glyphosate [58].

So why the concern?  How about a 41% increase in cancer risk. A February 2019 study found a 41% increase in Non-Hodgkin’s Lymphoma as a result of glyphosate exposure [59]. Glyphosate’s cancer risk connection was recently evident in a $78.5 million verdict against Bayer, who recently purchased Monsanto, out of California.

Glyphosate toxicity has been the focus of intense debate in recent years, but has been shown to have numerous potential negative effects [60]:

For the purpose of this blog, the estrogen effects of glyphosate are front and center.  Glyphosate does have weak affinity and stimulators effect in binding to the estrogen receptors but it does so much more.

Let me restate that statement to clarify the significant impact that glyphosate has on potential ER activity. Remember that the ER expression in breast cancer, colorectal cancer, and other cancers is the ER-alpha form.

Glyphosate signals the DNA to increase the production of ER-alpha. As a result of the ER-alpha production and expression as a result of glyphosate, the cell has an increased capacity to respond to estrogen.

Add this to the increased exposure to endogenous estrogen production and an increase in estrogen in the environment through other xenoestrogens and the table is set up for an estrogenic signaling environment that favors cancer. This is how in utero exposure can change the body even prior to birth.