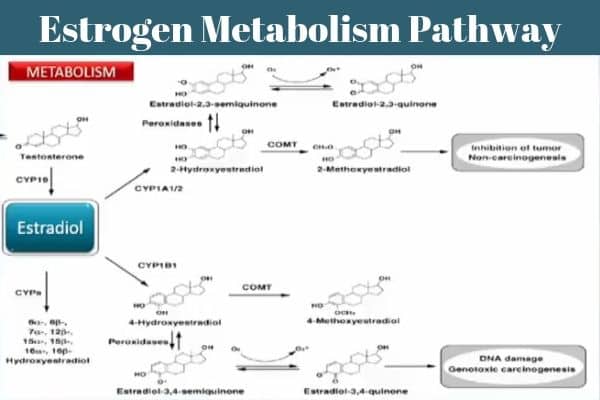 Estrogen metabolism pathway: there are three pathways and I label them as the good, bad, and ugly.

Previously, I mentioned the 3 primary estrogens: estradiol, estrone, and estriol. That is the simple. The complex is that there are many more estrogens that are actually produced by the body through the process of estrogen metabolism—estrogen metabolites.

For the purpose of the brevity of this blog post, I will stick to a brief discussion of these 3 primary estrogen metabolites.

The 16alphaOH-estrone metabolite has been historically labeled as a “bad” estrogen. This pathway of estrogen metabolism, as a whole, is the dominant pathway of estrogen metabolism 16.  The proposed high cancer risk of the 16alphaOH-estrone metabolite is due to its increased estrogen signaling and growth capacity through its tight binding to the estrogen receptor.  In addition, it is not easily removed leaving the metabolite tightly bound to the estrogen receptor resulting in a prolonged growth signal.

The implication is that it may not only be the estrogen levels or the estrogen receptors that are involved in cancer risk, but it is, in fact, what the body is doing with the estrogens through estrogen metabolism that also poises the cancer risk.

[65] Sowers MR et al. CYP1A1 and CYP1B1 polymorphism and their association with estradiol and estrogen metabolites in women who are premenopausal and perimenopausal. Am J Med. Sep 2006;119(9 Suppl 1): S44-51.