Do Humans Need To Eat Meat? 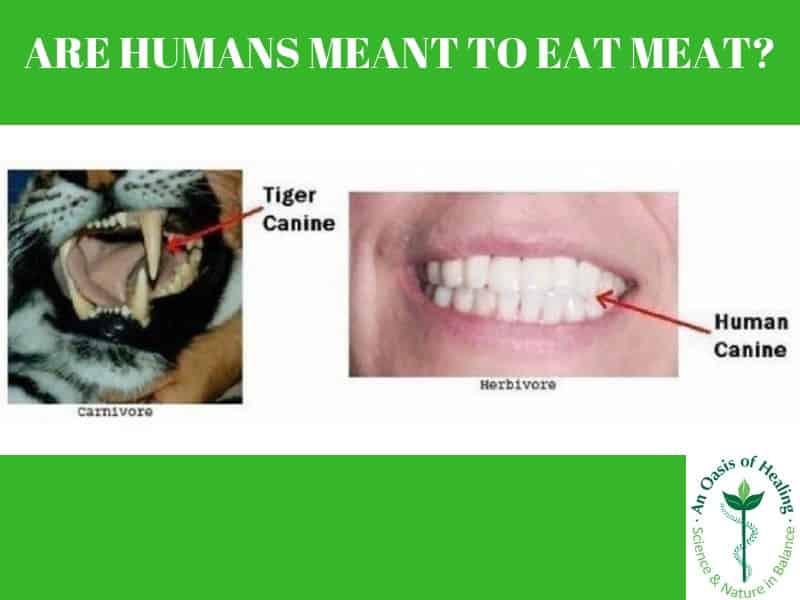 Do humans need to eat meat, not if health is a priority.

We receive variations of this question do humans need to eat meat and we wanted to highlight a particular question from a follower. She submitted the question below on our Instagram account and Dr. Thomas Lodi replied which turned into a blog post. Read below for the question and answer.

“Hi! I have a question about your most recent post about the reasoning behind why humans are not meant to eat meat. While I definitely agree the standard American diet includes too much meat, how can we meet the recommended daily intake of Vitamin B12 without ingestion of meat or animal products?

As far as I know, there are no natural plant sources that contain enough of this vitamin to meet our daily needs? I’ve also been taught that Vitamin B12 supplements are never fully vegan/vegetarian and that they’re actually derived from animal products.

This is coming from one teacher I’ve had so I don’t know the validity of that information, but if there is such a thing as a truly vegan/vegetarian Vitamin B12 supplement, can a man-made supplement really be what humans were always meant to ingest? My intention is not to be argumentative, rather I’m asking purely out of curiosity and a desire to expand my knowledge base on the subject! Thank you!”

The following is Dr. Lodi’s reply to the above question which is a good one. His reply should help a number of people understand that meat is not required to be consumed in order to attain our proper levels of B12.

Where does B12 come from do you need to eat meat to get it?

First of all, it needs to be understood that B12 production in nature only occurs in prokaryotes which is bacteria.

Nowhere else in nature is B12 produced. Therefore, we must get away from the false idea that eating an animal, or an animal product will provide us with B12 because the animals produce it. The fact is either the animal either ingested B12 and/or bacteria while they were eating.

Keep in mind that animals always have their mouths on the ground while eating. Hence, soil-based bacteria and feces loaded with bacteria are always entering their mouths.  Additionally, animals may have bacteria in their upper gastrointestinal tracts, which produce B12 and then absorbed into their blood.

The main reason that most animals have B12 is a result of them eating their own feces. This is true especially of cows that are grazing but it is also true of dogs and elephants, etc.

It is important to note that we have bacteria that produce B12 in our intestines however, they reside in our colons, hence we cannot absorb it. B12 is absorbed only in the last part of the small intestine, called the ileum. Since the colon is distal to, i.e., downstream of the ileum, the B12 produced there cannot be absorbed.

Large-scale industrial production of B12 occurs via microbial fermentation predominately using three different bacterial species. There are 7+ species of anaerobic and aerobic species of bacteria that produce B12 naturally.

B12 where does it come from the answer is Bacteria!

The question about whether or not a “manmade” supplement can be used (bioavailable) by the body is being put forth due to a misunderstanding. B12 is never manmade. It requires the metabolic machinery of bacteria to be produced.

It is fine to use B12 supplements as they are vegan/vegetarian.  The only other alternative of actually obtaining B12 is not a favorable one for the majority of humans. It would require eating your own feces.

In conclusion, this leaves us with the two basic alternatives of either eating the corpse of an animal who did eat their own feces, or we can grow the bacteria that produce B12 to do so and then encapsulate it for oral use or prepared for injection.

A very interesting phenomenon occurs in some people. Studies coming from India where they have generational vegetarians and vegans show that since the animal protein is low to absent in these people’s colons due to their dietary habits, the B12 producing bacteria are able to migrate to the small intestines and when they (bacteria) produce B12, it can be absorbed in the ileum.

After replying to her with the answer and asking for permission to use her IG profile name, she replied, “Thank you so much for taking the time to respond to me and clarifying this!! I’m currently a student of chiropractic and this question has been on my mind ever since it was brought up in one of my classes several months ago. Feel free to use my profile name! I’m sure others have wondered about this topic as well, so I think making a blog discussing this is a great idea :)”. Her IG handle/profile is: @tiluetkemeyer and we thank her for her question!