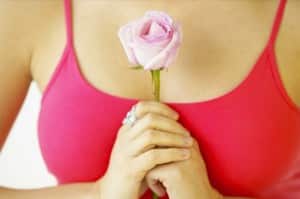 Breast cancer is the most prevalent cancer in the world today. More than 1.1 million women each year are diagnosed with breast cancer and over 200,000 of these women are Americans. These statistics are frightening especially in light of the fact that we are increasingly being told that genetics play such a major role in the development of cancer. The result is that most women feel helpless. As if getting cancer is as likely to happen as getting the flu.

Fortunately, we are coming to understand that influences other than genetics are far more important in the development of cancer and can even override genetic ‘tendencies’. In January of 2008, the National Institute of Health announced that it would invest over $190 million over the subsequent five years into researching epigenetics.

The Process of epigenetics determine how a gene will be expressed and therefore control growth and development. 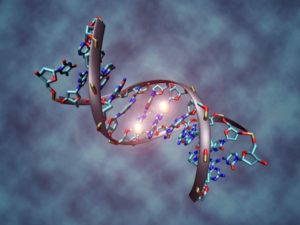 Epigenetics refers to the fact that it is the environment of the cell that determines which genes will be turned on and which genes will be turned off. Clearly, if all of the 30,000 to 35,000 genes in our cells were turned on simultaneously, we would not only be totally dysfunctional and unable to sustain life, but we would not even look human. So, it is not the genetic code that influences health and disease but rather the delicate coordination of these genes turning on and off.It is this symphonic interplay of gene expression, which results in the unique complexity of every individual. Even identical twins change differently over time when exposed to different environments.

What determines the environment of a cell? Diet and environmental conditions!

Researchers have also come to understand that epigenetics changes can be passed on from generation to generation. So, what you eat and how you live can actually influence how your grandchildren will fare when they are born. This ‘inheritance’ is far more important than any amount of money or property that one could or would leave. Let health be your legacy.

What in the world does this have to do with broccoli? 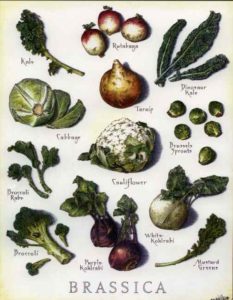 There are over 300 case controlled studies, which clearly demonstrate that eating vegetables protects against the development of cancer, specifically vegetables that are in the genus of plants known as Brassica, and more specifically, broccoli. Other vegetables in this category include cabbage, watercress, kale, brussel sprouts, cauliflower, kohlrabi and lesser known ones like Peruvian Macca and mustards. As the number of servings eaten per month go up, the odds ratio of developing cancer drops significantly. For example, the odds ratio for breast cancer when five or more servings per week are eaten is 0.58, which is almost a 50% reduction in risk!

Although researchers at the University of California at Berkeley discovered that a compound in Brassica vegetables is a powerful modulator of the immune system resulting in potent anti-viral, anti-bacterial and anti-cancer activity, it is Dr. Jed Fahey who has been at the forefront in this explosive area of research.

Dr. Jed Fahey is a Faculty Research Associate in the Department of Pharmacology, Laboratory of Molecular Pharmacology at the John Hopkins University School of Medicine and a plant physiologist who manages the university’s Brassica Chemoprotection Laboratory. Much of his work has been in the developing of cruciferous (Brassica) plants as chemoprotective agents.

This information is becoming critically important and supremely relevant today. The WHO announced last year that by 2010, cancer would become the leading cause of death worldwide. The Multinational Brassica Genome Project (MBGP) and much of the research in this area can be found at www.brassica.info

Researchers in Italy published in the June, 2005 issue of the Journal of Nutrition that when they mixed cauliflower juice with breast cancer cells, not only did the cancerous cells stop growing, but at higher doses they were actually killed (they exploded), and not by the usual mechanism known as apoptosis. Furthermore, normal cells were not affected because, for some unknown reason, cauliflower has a preference for breast cancer cells over other mammalian cell lines. Even more remarkable is that this same effect was seen in both estrogen-receptor ER (+) and ER (–) cells. There is an obvious implication here that not only are these vegetables protective regarding the development of breast cancer, but they may even be useful in treating cancer once it has arisen.

It is not estrogen that is the problem in breast and other cancers, it is what the liver does with the estrogen…the metabolites. The cytochrome 1B1 enzymes in the liver are stimulated by cigarette smoke, charbroiling of flesh foods, the burning of different fuels as well as many other environmental toxins. These enzymes, in turn convert estrogen into 4-OH-estrone, (E1) a potent genotoxic (cancer producing) substance. On the other hand, 2-OH-E1 is a “good” estrogen metabolite that is produced by the cytochrome 1A1 enzymes of the liver, stimulated by broccoli and its Brassica cousins.

One can easily measure the ratio of the 2-OH E1 to the 16-alpha-OH E1 in the urine over time (24 hours). If the ratio is low, the risk for breast cancer is increased, and if high, the risk is reduced. In fact, one pound of broccoli per day (approximately 500 gms) shifts the ratio significantly. For every 10 grams of broccoli consumed per day, there is an increase in the ratio of 0.8. Therefore, the recommended amount to be consumed for different individuals can be calculated readily, once these results have been obtained. The conclusion drawn by a respected cancer journal is that broccoli is an effective and acceptable strategy to stop making cancer.

In addition to the metabolism of estrogens, the Brassica plants stimulate certain enzymes in the liver to enhance detoxification, which is of considerable import since we swim in a sea of carcinogenic toxins.

The liver utilizes two mechanisms to remove toxins, referred to as Phase I and Phase II detoxification.

In Phase I, liver enzymes modify toxic substances in order to make them recognizable to Phase II enzymes. In Phase II, a different set of enzymes convert these modified toxins into more water-soluble forms, which can then eliminated through the urine or the feces. The compounds in Brassica plants that make them bitter and give them a strong and sometimes disagreeable odor are actually the active, anti-cancer components. They function as the defense system of the plant, sort of like an ‘immune system’. They are known as phytoalexins. These substances are actually modified and used by the agriculture industry to develop pesticides and fumigants.

Chemically, these compounds are known as glucosinolates, which are modified to become isothiocyanates (ITC), the active, anti-cancer compound. An enzyme known as myrosinase is released when these plants are injured which converts the glucosinolates into ITC, hence chewing is required to activate these anti-cancer compounds. The normal gut flora (healthy bacteria) also produces myrosinase, however, most Americans have taken too many antibiotics and other toxic chemicals, both voluntarily and involuntarily resulting in very unhealthy and unbalanced gut flora. So, it is advisable that we all chew thoroughly, just in case.

These ITC compounds, after conversion from glucosinolates, greatly induce Phase II enzymes in the liver, which results in excretion of the carcinogens circulating throughout the body. Although these compounds from Brassica vegetables may modify the Phase I enzymes, they have a much greater effect on Phase II, which is why they are so important. Environmental toxins, such as dioxin (extremely poisonous), have their effect by inducing only Phase I enzymes, which activate many carcinogens. Without the concomitant activation of Phase II enzymes, the results are often fatal.

These Brassica derived chemicals also stop the growth of cancer cells after the initiation phase (cancer cells begin), interfere with promoters that make cancer cells grow (such as estrogen), interfere with angiogenesis (blood vessel growth in tumors), activate apoptosis (cell death) and block rapid growth of cells. This data is found throughout the scientific literature in both in-vitro and animal studies.

There are many excellent supplements containing flavonoids, quercitin, sulforaphanes and the other compounds derived from Brassica plants, but if one wishes to obtain these benefits in the most potent, efficacious and natural way, just eat them. A word of caution is in order. About 97% of these nutrients are lost with microwaving and 66% with boiling. Steaming is an acceptable way of preparing these vegetables for consumption, but raw, fresh and organic will give you what nature intended…a long and joyful life.

Influence of temperature and ontogeny on the levels of glucosinolates in broccoli (Brassica oleracea var. italica) sprouts and their effect on the induction of mammalian Phase 2 enzymes.

Urinary excretion of dithiocarbamates and self-reported Cruciferous vegetable intake: Application of the ‘Method of Triads’ to a food-specific biomarker.

“Brassicas” in Encyclopedia of Food Sciences and Nutrition

Genetic and environmental effects on glucosinolate content and chemoprotective potency of broccoli.

The “Prochaska” microtiter plate bioassay for inducers of NQO1.

The chemical diversity and distribution of glucosinolates and isothiocyanates among plants

Broccoli sprouts: An exceptionally rich source of inducers of enzymes that protect against chemical carcinogens

The Metabolic Fate of Purified Glucoraphanin in F344 Rats

Potent activation of mitochondria-mediated apoptosis and arrest in S and M phases of cancer cells by a broccoli sprout extract.

Extremely potent triterpenoid inducers of the phase 2 response: Correlations of protection against oxidant and inflammatory stress.

Bax and Bak Are Required for Apoptosis Induction by Sulforaphane, a Cruciferous Vegetable-Derived Cancer Chemoprotective Agent. (#)

Sensitivity to carcinogenesis is increased and chemoprotective efficacy of enzyme inducers is lost in nrf2 transcription factor-deficient mice. (#)

Electrophile and Antioxidant Regulation of Enzymes that Detoxify Carcinogens (#)

Chemical and Molecular Regulation of Enzymes that Detoxify Carcinogens (#)

Rapid Detection of Inducers of Enzymes that Protect Against Carcinogens (#)