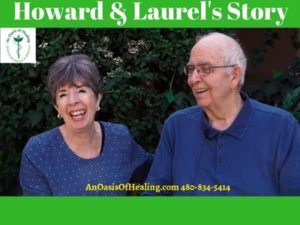 This is the story of Howard and the alternative cancer treatment for colon cancer that he received at An Oasis Of Healing.

Howard is a retired Professor from Utah and came specifically to our healing center for the treatment of his colon cancer. He is 81 years old and was joined by Laurel, his wife, at our center to support him during the treatments.

His diagnosis today is that it appears that he has completely overcome the cancer that was there and now it’s just a question of completing the “mop up” in Howard’s words and re-developing the strength and fortitude that was lost through the anemia that he experienced during the onset of cancer.

Laurel stated that she is leaving our center in better health herself as a result of what she learned and the lifestyle changes that she made while with Howard at our center and now at home.

Howard and Laurel, prior to the colon cancer, were starting to get ready to go overseas and serve on a Church mission in the Ukraine. In preparation for that, they were trying to get Howard’s strength and vitality increased for the trip.

They would go walking every morning and Laurel started noticing that Howard didn’t have even the strength to go on their walks. It kept getting worse where if he did go on a walk when he returned, he would have to nap for the whole rest of the day.

Laurel took him to the Doctor’s and found that he was severely anemic. Finding out why he had anemia lead to a colonoscopy that revealed a very large mass in his colon. They had considered surgery and all the conventional therapies but after prayerful consideration, they decided to come to An Oasis Of Healing for alternative cancer treatment.

Howard has had no convention therapies for his colon cancer. The year prior he was diabetic and much heavier than he is now weight wise and had already started on a journey to overcome those two things and had done a good job of that prior to arriving here.

They did explore all of their options when it came to how best to treat Howard’s colon cancer and decided on coming to An Oasis. They both feel that they made the right decision in doing so.

Howard and Laurel were at our healing center for 8 weeks. They made lifestyle changes including changing the way they eat. They did a lot of meditation and Howard received in Laurel’s words “cutting edge technology and treatments” while here.

Laurel said “it’s a holistic approach including the emotional, spiritual, nutritional as well as the medical standpoint and it’s been truly miraculous”. She’s sees her husband who could barely walk around the block with a lot of strength, vitality, a spring in his step and a smile on his face.

Laurel can tell that Howard is a different man from when he arrived. Howard states that “it has been a major change in his life and he feels that it’s a lifestyle change that he can live with and have success with enjoying a much higher quality of life than if he wouldn’t have done it this way”.

Laurel also stated that she has been a caregiver for a lot of years and when she arrived, she was pretty depleted and run down. The staff at An Oasis recognized that and gave her some therapies that have helped her regain her health and vitality and she said “I feel younger than when I arrived”.

Howard said that he was “very impressed with our entire staff at Oasis, it’s a very unusual group of individuals who are very concerned about giving care and helping care givers. They have really been a great inspiration to us both”.

To read the full story about Howard and Laurel’s journey to the Ukraine, visit the link below.