Alpha lipoic acid (ALA) is actually a fairly unknown nutrient. 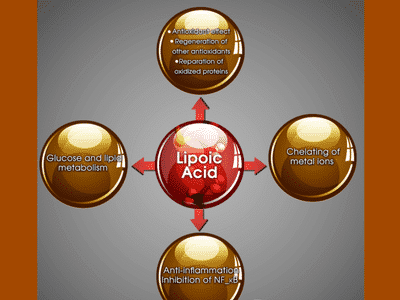 It is a chemical containing sulfur that’s produced in animals and plants and a natural antioxidant. It has been revealed to have an impressive ability to restore other major anti-oxidants and also safeguard the body from oxidative tension and stress. Several studies conducted have also shown that it has the ability to perform better than chemotherapy treatment in its ability to lower cancer cell formation; with little to no adverse effects or further damage.

Alpha lipoic acid is discovered in many foods such as vegetables and fruits. Many alternative wellness practitioners make use of this supplement in far higher dosage levels to assist those with diabetic issues, neurodegenerative problems, auto-immune issues, cancer, and also cardiovascular disease. Also, in order to increase performance with healthy people, alpha lipoic acid in used as a supplement.

ALA helps carry Vitamin C to all cells; regenerates the antioxidant effect of vitamin C.

Cancer cells have an arch rival and that is oxygen. Cancer cells are anaerobic or better put, they live without oxygen. Alpha lipoic acid has been proven to elevate the production of oxygen inside cancer cells. This elevated oxygen production ignited the mechanism for genetic apoptosis and the mutated cells were eliminated.

Cancer treatments performed conventionally use processes that do more damage to DNA while creating free radicals. Cellular damage is also done by radiation treatments which is also to blame for the growth of secondary tumors.

Alpha lipoic acid helps prevent the spread of metastatic cancers. It accomplishes this by creating a reduction in the action of certain key enzymes used to penetrate tissues by tumors. It also decreases the growth of new blood vessels that supply cancer cells known as angiogenesis.

ALA helps in the process of making antioxidants more readily available to cells, decreases damage done at a cellular level, bolsters health, and pursues cancer cells as well as promotes different cancer factors that enhance destruction.

In terms of saving lives which treatment, chemotherapy or ALA offers the best therapy to save a person’s life?

Growing up an hour south of Chicago, Illinois, has led me to sunny Arizona.  I moved here in July, 2020, looking forward to a longer summer and a short, mild winter.  After obtaining my associate degree in nursing in 2007, I furthered my skills with hospital experience including orthopedic telemetry, pediatrics, medical surgical and home healthcare.

My most recent position was managing an infusion clinic for a fast-paced Infectious disease practice over the last 5 years.